Haase working with NOAA and CW3E to improve forecasting

Atmospheric Rivers, are a weather phenomena that plays a key role in the variability of the water supply and the incidence of extreme precipitation events along the West Coast of the United States.  AR2018 is a field campaign that will make offshore measurements of atmospheric rivers before they impact the west coast of the USA as part of the Center for Western Weather and Water Extremes (CW3E) effort to improve forecasts for water resource management and flash flood prediction.

As part of the field campaign, last week Jennifer Haase installed the Radio OCcultation version 2 (ROC2) instrument and GNSS Instrument System for Multistatic and Occultation Sensing (GISMOS) components onto the NOAA G-IV reconnaissance aircraft which will fly over several atmospheric river events this winter. This Global Navigation Satellite System (GNSS) radio occultation instrument will provide profiles of the upper atmosphere in the environment surrounding the storm, and this unique dataset will be used for assimilation into a high-resolution numerical weather model in hopes of improving forecasts of these events as well as to better understand the physics of atmospheric rivers. The new ROC2 instrument is a lighter version of the original GISMOS, and is also planned to fly around the equator onboard a super-pressure balloon and observe waves in the tropical stratosphere and their effect on the circulation of the atmosphere for the upcoming National Science Foundation #Strateole2 field campaign. 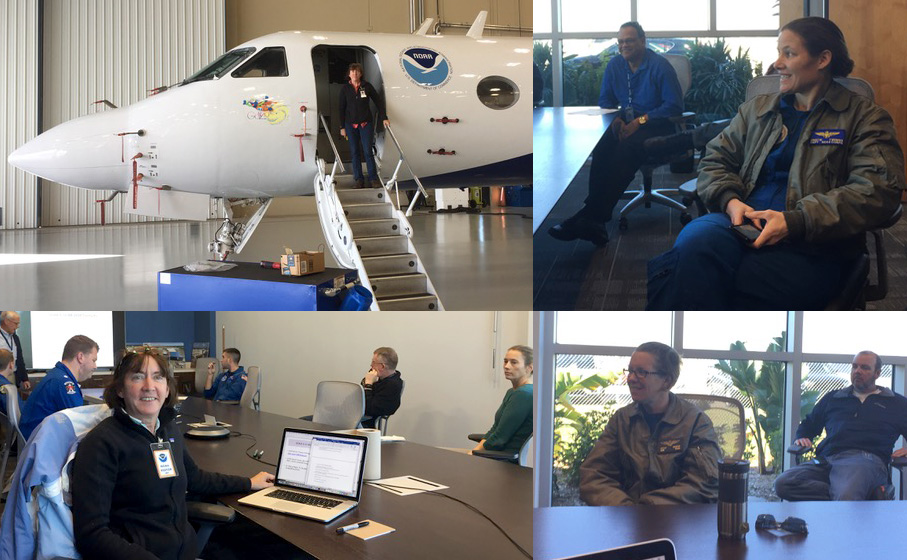 Image: Haase and members of NOAA’s hurricane hunter team during the preflight weather briefing on January 23, 2018